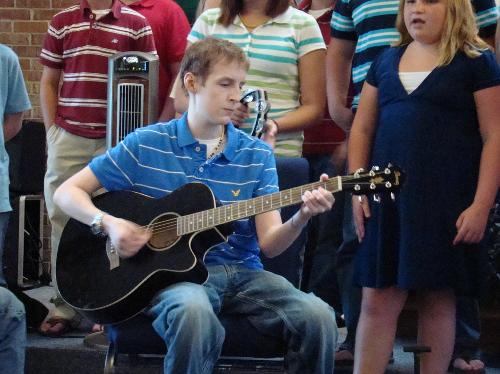 Although Russell was saved at the age of 9, it was at a Youth Retreat in Gatlinburg, TN, where he made the decision to surrender his life 100% to God.  He testified that he was putting aside all pride, and promised to serve the Lord no matter what.  Russell shared his testimony during the Sunday evening service at his home church.  The members commented on the confidence and conviction with which he spoke.  No one could have ever imaged what would happen next. Just ten days later, Russell was told he had a brain tumor. Russell never went back on his promise to God.

On August 18, 2008, five days after getting the life-shattering diagnosis, Russell had brain surgery to remove the tumor. The doctors also discovered that the cancer had spread to his spine and the majority of it was covered with tumors. When Russell woke up, he was unable to speak, sit-up, feed himself, walk, or any of the basic things we take for granted.  The strenuous rehab was grueling, especially while enduring 15 months of chemotherapy and radiation treatments.  The poison continued to wreak havoc on his frail body; however, Russell never complained.

In January of 2010, they received the wonderful news that Russell was cancer free.  Russell was able to go back to school part-time toward the end of his treatment while still in a wheel-chair.  Being able to connect with his friends on a daily basis was a huge encouragement to him. Russell was loved so much at his high school, Highland School of Technology.  The administration and teachers worked with him to help accomplish his goals.  Students often held fundraisers and made cards and banners for him.  One comment that stood out was written by a young student.  It read, “I am the outcast and freak here at Highland, no one ever speaks to me, but you have always gone out of your way to say hey and to talk to me.”  This is the type of thing his parents still hear to this day.

Russell started his senior year in the fall of 2010. He was able to get his drivers license and lead a somewhat independent life.  Russell was still making all A’s in his honor courses at school even though learning now had it’s own set of difficulties.  He was beginning to play the guitar at church again and many days Russell would sit in his room just playing and singing praise songs.  Russell was finally getting his life back.

On May 4, 2011, after a routine MRI we received the news they had hoped to never hear.  The cancer had returned and there was a tumor on Russell’s sciatic nerve.  Russell heard a preacher on the radio, while still in the parking garage of the oncologist office, that quoted, “I am crucified with Christ: nevertheless I live; yet not I, but Christ liveth in me: and the life which I now live in the flesh I live by the faith of the Son of God, who loved me, and gave himself for me.”  Galatians 2:20 became Russell’s life verse.

On May 7, 2011, Russell went to his senior prom and was crowned Prom King.  His mother and father slipped in and stood in the shadows.  They listened as Russell’s name was announced and all the students started chanting his name. It was one of the most wonderful experiences for his parents. To see how his peers rallied around their son brought joy to their broken hearts.

On May 22, 2011, Russell spoke at a local church about his faith and offered the hope of Jesus Christ to all in attendance.  God gave Russell the answer to the question we all ask: “Why?”  As he shared what he believed was God’s purpose for his situation, Russell encouraged others facing their own sickness or trials to “Cling to the hope you have in Jesus Christ.”

Only two weeks after having back surgery to remove part of the tumor, Russell walked across the stage to receive his diploma and graduate with honors.  The following week, Russell started a new treatment plan at DukeHospital.  Although chemotherapy and a new vaccine therapy were tried, the aggressive cancer would not respond to anything and Russell’s organs were being damaged.  After many weeks in the hospital, several trips to ICU, and months away from home, in January of 2012 they were told by doctors that there was nothing more they could do.

On February 3, 2012 over 100 people gathered in the O’Neal’s front yard to hold a candlelight/prayer vigil for Russell and his family. On February 4, 2012 at 11:22 PM even though Russell had lost his ability to see, he saw the face of God.  Even though he couldn’t walk, he ran the streets of gold.  And though he’d lost his ability to smile, he was smiling from ear to ear in the presence of our Lord and Savior Jesus Christ.  As his family lay in the bed with him telling him to run to Jesus and that they would see him soon, Russell received his reward!

Russell always had a smile and never complained.  Russell was a leader of the youth at his church, Goshen Free Will Baptist Church in Mount Holly, NC.  He also played guitar in the youth band.  He loved basketball and when he was no longer able to play because of balance and strength issues, he began coaching younger children.  While he was in remission, he and his father, Jeff, coached an 11-14 age team that went undefeated and won the championship.

But the real test of one’s faith is how we react when the winds of the world begin to blow.  While Russell was so weak from chemo and radiation and someone went to the altar, although he couldn’t walk, Russell would get on his hands and knees and crawl to the altar to pray with them.   Almost every Sunday he would throw up in the parking lot at church before going in.  He never wanted to misschurch even when he was so sick.  Russell never asked God to heal him, although he believed God was able if it was His will. He also believed God was in control and had a perfect plan.

This brief timeline does not tell the entire story of Russell’s journey.  The following link will take you to Russell’s CaringBridge page that is a day to day account of struggles he faced and the victories God gave.