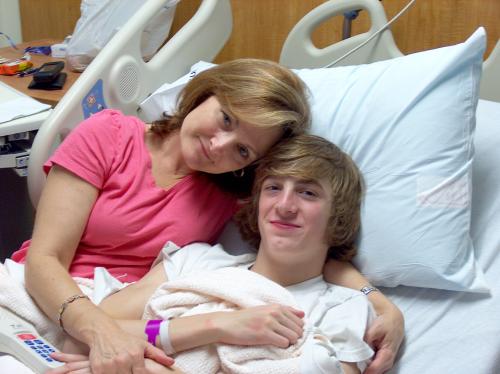 Hello, my name is Debbie, and I am extremely blessed to be the mother of Russell Grant O’Neal.  Although there is so much I would like to say, I want to share one specific event.  During Russell’s last days while sitting with him in his room, I asked   Russell what he would like to do for other children fighting this same horrible disease that had attacked his body.  He’s response was not what I had            expected.  He said “I would grant them the super power of their choice.”  Honestly, I chalked up his answer to the pain medications and brain cancer that had continued to take away his ability to think clearly.

Russell’s response from that day stayed with me and often came to my mind at the strangest of times.  I couldn’t figure out how I could pull off such a request, but I couldn’t shake the thought of it either.

Then it hit me!  Russell had attended Camp C.A.R.E. (Cancer Ain’t Really the End) in the   summer 2010.  He had the time of his life!  He was even awarded the Spirit of Camp Award.  At home Russell was unable to get out of the bed most mornings due to the fatigue and pain in his body.  However, at camp he was up every morning and in the pool at 6:30 AM.  He wanted to participate in everything the camp had to offer including the “Polar Bear Club”.  At camp there is a huge Ice Burge Float in the lake that the children can climb (like mountain climbing) and jump off the top.  Russell worked at making it to the top, and by the end of the week he made it.  Amazingly, he was able to find the strength that eluded him at home.  There is also a rope swing that the children use to jump off a high platform (which is entirely too high) and swing out over the lake and let go to splash into the lake below!  I remember them telling me about Russell climbing the ladder to the top and then having to stop him to check with the     doctor to make sure it was OK for him to jump.  Thankfully, Dr. McMann said “Let him go”!  Russell flew out over the lake and made a grand entrance below smiling the whole time.

You see, while at Camp C.A.R.E. Russell had amazing strength, the ability to fly, and had x-ray vision to see past the cancer and see the beautiful people around him.  Russell had all the super powers that a person could dream of.  So it is no surprise that our first endeavor for the Russell O’Neal Impact Foundation is to build a cabin for an additional 30 children at Camp C.A.R.E. Each year there are children unable to attend because of lack of space.   Please consider joining us in making it possible for these precious children to have super powers, if only for one week.  Life is too short and everyday is a gift. Thank you for making a difference today.

Russell was able to attend Camp Care and he said that it made him forget that he had cancer and just let him be a kid again.  No judgements, no stares, just people who loved him and encouraged him to HAVE FUN!!

The cost to build this cabin/activity center is approximently $200,000.00.  This will enable more kids to go to camp.  Currently only 150 are able to attend and we’d like EVERY child to be able to experience this life changing camp.

Camp CARE {Cancer Ain’t Really the End} was formed in 1985 by a group of health-care professionals. Staffed entirely by volunteers and funded by donations, they provide over 150 campers each year with a normal camping experience.

Camp CARE provides cancer patients a chance to get away from the realities of living with cancer and to share their thoughts with other children like themselves.